Treasure Tides is one of the expansion farm and one of it’s main crafting building is the FarmVille Tinker’s Cabin. This building is expected to be where the majority of crafting tasks will be done once a player arrives in Treasure Tides farm. It will hold initially a total of 20 recipes and the longest crafting time will belong to BARGE ANCHOR which will require an 8 hour crafting time. You will find on this post the complete information on each of the recipes including the bushels needed, the crafting time and mastery count. 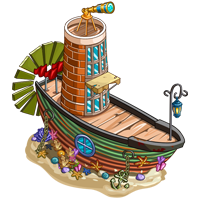